Wizard Willie the Star Attraction for Carnival and Calcutta

Wizard Willie the Star Attraction for Carnival and Calcutta

The wizardry of champion jockey Willie Pike is set to add a magic touch to this year’s Townsville Winter Racing Carnival.

One of the best jockeys in Australia, Pike and Brisbane-based New Zealand star Samantha Collett will ride at next Thursday’s Lightning Hcp meeting and after the last race appear as special guests at a gala Calcutta evening at the track.

Tickets for Thursday’s Calcutta Night are on sale through Eventbrite.com for $100.

“Willie has attracted a huge following riding winners right across Australia and having him here for the carnival as a special guest of the club is just fantastic,” Mr Petrofski said.

“Samantha Collett is a great jockey in her own right who has enjoyed a remarkable career in New Zealand is now riding winners in Queensland since moving to Brisbane.

“Having them both here will give punters an opportunity to see them in action at the track on Thursday and then hear from them and meet them in person at the Calcutta after the last race.”

The Wizard of the West, Pike has dominated racing in Western Australia for a number of years and following a number of successful raids on the east coast moved to Sydney earlier this year where he has made an immediate impact. 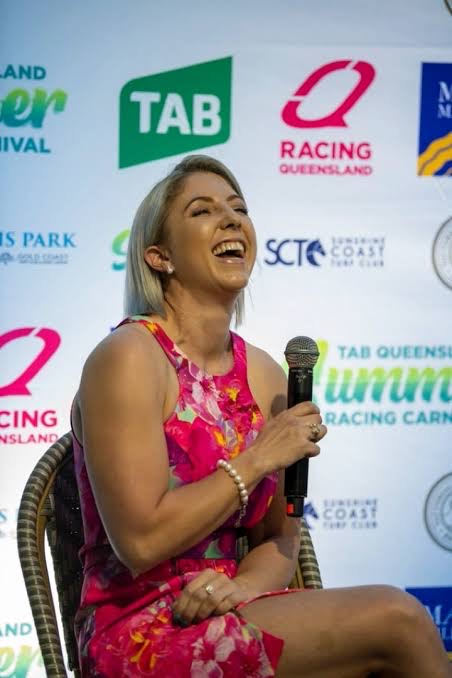 Collett has also made her mark in a tough industry with a premiership win in her native New Zealand and almost 1000 career winners in the saddle.

From a jockey family, Collett moved to Brisbane late last year looking for new challenges and has already ridden more than 60 winners in Queensland since making the shift.

Calcutta tickets can be bought from the club or through committee member Sue Byrnes (0419710961).

The Calcutta night will be held in the function area under the Party King Grandstand and includes dinner and a welcome drink on arrival at 6pm.

Pictured (insert) Samantha Collett at the launch of the Queensland Racing Summer Carnival in November 2021.