The 2020-21 season was another big year for Chillemi who surpassed an incredible 1300 career winners on the way to his latest title.

Chillemi and co jockeys’ title winners Graham Kliese and Chris Whiteley were all honoured in a special presentation at Cluden Park on Saturday.

“I’ve been very fortunate to have the backing of Tom (Hedley) and a great team,” Chillemi said.

“We’ve had some very good young horses, some good riders to win on them and it was a great year for us.”

Chillemi claimed the Townsville title with 29 winners for the season and currently sits on 1317 career winners.

The champion mentor went winless on Saturday, but only just.

He went close to winning the race named in his honour when Boomed fell short by a long neck bin overhauling Hallside Hammer in the Roy Chillemi Trainer of the Year 3YO Hcp (1200m).

The Townsville Turf Club also honoured Kliese and Whiteley who tied after one of the closest premiership battles in years.They both finished on 23 winners, just one ahead of Stephen Wilson who had led the race for most of the season.

For Kliese it was a remarkable personal achievement after returning from almost two years on the sidelines with serious injuries.

“It was a fantastic year for me but the result showed just how competitive it was in the jockeys’ room,” Kliese said.

“It was fitting to tie with Chris, I just wish Steve was with us. He worked very hard for it and he deserves one.”

“It was a good year and makes all of the travelling worthwhile,” he said.

“But winning premierships is only possible with the support of owners and trainers and I’d like to thank them for putting me on.”

Whiteley finished the day on a high.

He rode Pluckercarn to victory in the last, the Willygood Class 1 Hcp (1400m).

Meanwhile, the Townsville Horse of the Year for 2020-21 also finished in a tie between the Chillemi-trained mare Willygood and former Mackay galloper Overseas.

Willygood was a revelation, racing her way through the restricted grades to eventually take her place in the Cleveland Bay Hcp .

Overseas established a big following at Cluden with his powerhouse performances for trainers Mick and Trinity Bannon.

The four-year-old is now being trained on the Sunshine Coast by Billy Healey. 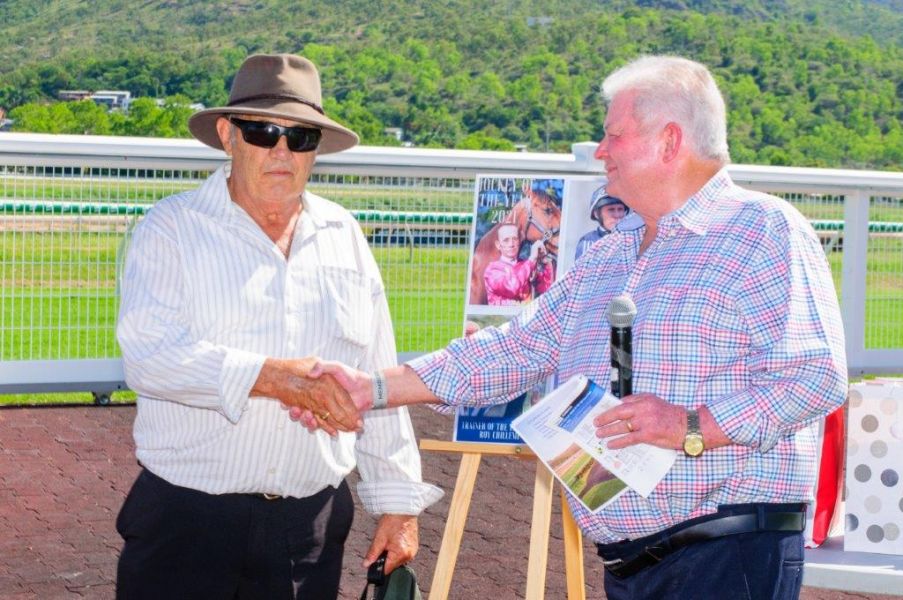